Home Books and courses Blog Speaking About Me My Library Login 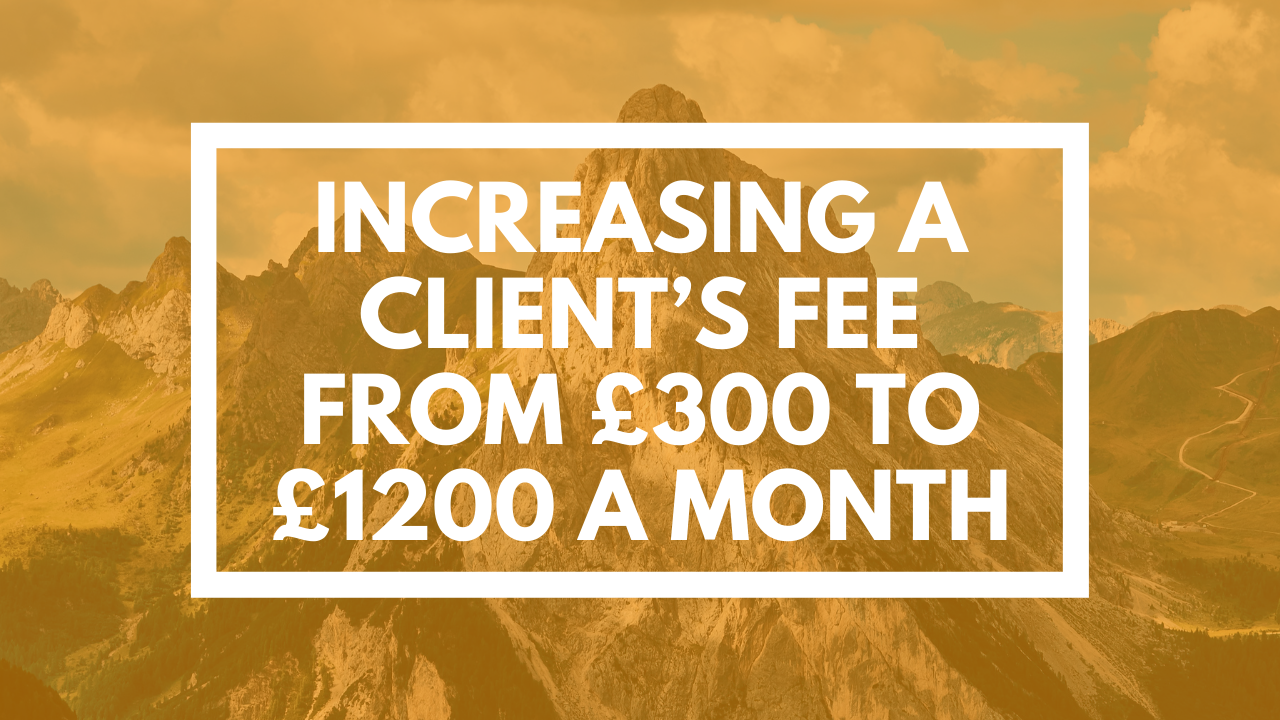 This is the story of an accountant who has really mastered the value conversation. You can find it on my YouTube Channel here: https://youtu.be/PYUcIXFWEeY

Neil Criddle is based in Weston-super-Mare, in the Southwest of the UK. Prior to starting his business, Neil had about 12 years in industry working for lots of large corporates including veterinary, financial services, construction and telecom industries, but no experience with an accountancy firm.

In a recent interview I had with Neil, he told me, “As I got further into my career, I wanted to help people, but in my own kind of way. I’m not a massive fan of following the rules if I think the rules aren’t fit for purpose for the end user. I was doing a lot of good work and getting frustrated by the fact that I couldn’t help people in the way that they would have benefited from because of political red tape and hierarchies. So I started my business back in January 2020 with that being a sole mission, really, but I had no prior accountancy practice experience before.”

Getting things right from day one

Now, most accountants, including myself, make a lot of mistakes in their first few years of practice, and they then spend years fixing those mistakes and fixing their pricing. However, Neil’s story is a bit different, because he joined my Value Pricing Academy very early on so that he avoided making those pricing mistakes in the first place. He knew he needed to focus on marketing and pricing, both things he had little experience with.

Neil said: “I lost my job in January 2020, and I made the decision that I was going to really attack this full time with no other household income. I was earning about 20% of my previous job’s income - not enough to pay the bills, not enough to pay the mortgage, or to feed the family. So I thought ‘I've got to do this, and this has to happen relatively quickly’. I had about two months’ worth of cash in the bank to live off, so I set myself a deadline of the end of March 2020”

Neil decided to invest in the training to get things right from the very beginning, and that was a difficult decision for him, but one that has paid off in the long run.

And then, in March 2020, the UK went into lockdown due to the global COVID-19 pandemic. Neil was hit with doubt. He worried that if his clients left, he wouldn’t have the revenue, he wouldn’t be able to afford the training, and that would be really upsetting for him. Fortunately, things didn’t turn out that way, but in that January to March period there was a lot of worry and uncertainty for Neil.

“I didn’t want to be anchored to one price”

Initially, Neil decided to factor in a formalised proposal process which involved having two meetings with a lead, the first being a discovery meeting to figure out exactly what they wanted, and the second where Neil would discuss the proposal in detail. These proposals weren’t particularly complicated; they were drawn up on a Word document, exported as a PDF, and sent to the client.

Neil told me, “One of the things that I did very early on was give options. I didn’t want to be anchored to one price, because I knew that that price would either be too cheap or too expensive.” Neil also made sure his services were clear for people. He offers four key services: accounting and tax, bookkeeping, payroll and business advisory, and he decided to keep that relatively simple.

But, Neil admitted, “I definitely undersold work early on, which I think everyone does when they first start out, to try and build up a bit of a base. But I think the proposal process, and the pricing options, and giving three different tiers of service - that was very quickly something that I integrated, along with making the services clear for people.”

When I asked Neil why he decided to follow this two-meeting process, he told me that that was a priority for him for a number of reasons.

But during a pandemic and lockdown, getting clients to agree to two meetings over Zoom rather than a telephone call and an in-person meeting can be difficult. Neil told me, “I prefer face-to-face contact. I get a good rapport, have some food and drink, it just makes things a lot easier. Zoom is okay, it's fine, and I can hopefully impart my personality on a call. People can see my wacky office in the background and things like that. But I very much prefer to meet people face to face.”

One of the benefits of the meeting process that Neil found was allowing him to discover how good a fit those clients were for him. “I don’t make a habit of turning anyone away, and I always leave the price discussion to the end of the call. So, if they’re asking “Price, price, price”, I try and price them upwards in terms of what I would normally price an average client. Because I know that they’re probably not my ideal sort of client, so in order for me to take them on, it’s going to have to be worth my while.”

Neil then told me that the clients that he went through this two-meeting process with ended up attracting higher fees. That’s because the fact that they’re willing to engage in two meetings shows that they can see Neil’s value, they’re appreciative of him, and they’re grateful that he’s giving them time to think over their options and not rush the process.

How did Neil come up with his prices?

Neil told me, “There are probably five or six other local firms providing similar services, and I’ve never once understood or reached out to them to see how much they charge. I’ve always gone down a path thinking ‘What price would I be happy with?’ And I've come up with different thresholds, that I went through for each service. And I said, ‘Right, from my essentials package, these are the prices that I would be happy with accepting for that level of service.’”

After figuring out that base price for his essentials package, Neil would then scale that price up by roughly 30-50% for his other options.

Neil told me that, as time has gone on and he has increased his confidence, his social media presence and his brand, his average fee has also increased. “It’s probably 60-70% higher on a monthly average now per client than it was back in March 2020.”

Neil shared with me a specific example of how his pricing successes have played out and benefitted him. He told me how it started with someone reaching out to him on his Facebook business page. They were looking to start a limited company and they didn’t know where to start. So, Neil had an initial phone call with them.

In that call, he asked how they’d heard about him, to which they answered that they’d seen an introductory video he had created on his Facebook business page, and they’d liked what they’d seen of Neil’s personality and approach. This was straight away a huge win in marketing for Neil!

When they had a second call together, they went through several pages of options, and the client signed up for Neil’s central start-up package, which was around £150 per month. Neil told me, “Over time, we grew as businesses together, and it’s quite nice that we could do that. We were quite friendly; we had meetings and went to the pub together in July when they reopened after the first lockdown.”

Then the client told Neil that he wanted to start another business similar in scale and scope to the first one. So, they set up the second company, mirroring the first proposal as he was so happy with that one.

Then, at the end of 2020, it was time to look at an annual renewal price. Neil told me, “This was one of my first renewals that I did, and we had not long ago gone through how to effectively do renewals in the Value Pricing Academy.”

With those ideas in mind, Neil had a Zoom meeting with the client, and he relayed three proposals for him, the cheapest one being in the realm of £200-250 a month, so about a 1/3 increase in what he was paying before. But the Full and Premium options brought in some bookkeeping and advisory services which the client hadn’t needed the year before. Neil explained the benefits of these extra options and set the Premium package at about £600. Straightaway the client said “Yes”!

The second business wasn’t due for renewal till September, but Neil asked if it would make sense to bring it in line with the first one, and again the client immediately said “Yes”. Neil said, “He liked the service for the first one, so why wouldn’t he want it for the second one as well? I went from generating a fee of about £300 per month for the two businesses to about £1200 a month.”

Neil said, “I went into this for a reason: I'm passionate about helping people. The money side of things is a by-product. But the more I achieve my targets, then by default, the happier I’m making people because I'm dealing with more clients and more clients are giving me amazing feedback. And that's leading to referrals and more people viewing my content and more clients. So It’s a circle: if you do something good then it will pay for itself multiple times over.”

Neil has also seen the social media side of things explode thanks to his hard work, and he’s met some really interesting friends from all over the world from the Value Pricing Academy.

I asked Neil what his top tips for anyone out there starting an accountancy business would be. He replied:

If you want to watch the full video with Neil, go to https://youtu.be/PYUcIXFWEeY

If you found this valuable and would like to learn more about value pricing, I run a free live online training session every month with a topic chosen by you. Attend live and you can ask me any questions you have. Click here to register and I will send you an invitation to the next session.

And if you would like to join a community of like-minded accounting professionals learning to price more effectively and confidently, you can join my Facebook Support Group here.

Wishing you every success on your pricing journey.

Take your first step on "Your Pricing Journey"

Your Pricing Journey gives you access to my pricing training delivered every month in easy to digest, and easy to implement, steps.

So if you sometimes find yourself working too hard, for too little money, this programme will solve that problem.

Get the training NOW
``

The fastest way to change your profits is to get better at pricing.

Every month I run a free online training session - register your free place on the training now.

how to price bookkeeping

Enter your info to receive news, updates and much more...